Rupert Murdoch Comes Out as Sith

It was a modest ceremony held in the fashionable mid-Manhattan restaurant Douche. After a brief introduction by Anakin Ryan, former Speaker of the House of Representatives, Murdoch gave a brief, ungilded speech in which he revealed his true nature. The audience then retired to the roof of the building to watch as the Sith Lord destroyed Asteroid 2018CB with the laser cannon his minions had secretly built in an enclave hidden under a volcano in Belize.

“I can’t say I was particularly surprised by Murdoch’s announcement”, notes John Shrill, author of Moguls and their Minions. “You see a man who surrounds himself with a slave race called ‘News Corp Employees’ and you have to wonder.”

But that doesn’t undermine the bravery of the act. Historian Dick Blaney points out that,  “we forget how traumatic coming out is for people of Murdoch’s generation. Whose heart strings weren’t tugged during Sidious Nixon’s 1968 interview with Dick Cavett about being seduced by the Dark Side in a world dominated by cis-forced supporters of Light?”

Jeremy Banks, a retired Imperial Storm Trooper who is now Head of Security for Foxe News in NY agrees. “Things have really changed since the Millenium. We owe a lot of that to the work of Darth Rove. When I was growing up, supporting the Dark Side was all about signalling and subterfuge. Y’know, belts made of shrunken Wookie skulls, veiled references to how cool it must have been to see Alderon vaporized. Now I can advertise my support for the Dark Side  to all of Middle America through Sinclaire News. They ask for my expert opinion every week!”

Many on the Dark Side use Murdoch’s ‘coming out’ to emphasize what they argue is a fundamental inconsistency in our attitude toward the Force. Exclaims one House intern who was seduced to the Dark Side by Plagueis King (formerly of Iowa 4), “Light-Side Liberals have all of the sympathy in the world for a transgendered man in a sequined ballgown singing show-tunes, but let people know you secretly desire to blow up planets and dominate all life and suddenly its ‘Dude, you really need therapy’. Sith Conversion Therapy! The hypocrisy!”

With political polarization at the center of our political discourse this election season one has to wonder, is the world really more Manichaean1
Manichaeus (216–276 BC) was a philosopher/theologian who had a dualistic cosmology in which good is balanced by evil.
than in our parents’ time, or are we just more upfront about our support for good and evil? With the Light Side of the Force struggling to maintain control of the House of Representatives and the Dark Side targeting the Senate, its tempting to shrug and say, plus ça change, plus c’est la même chose. 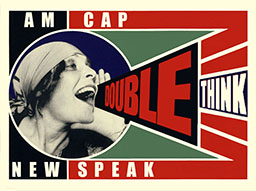